In addition to gathering location and inhaler usage data for the city to use, the inhaler sensors also helped the participants learn more about their asthma triggers and improve their management. The inhaler sensors connected via bluetooth to a smartphone app that helped remind participants to take their medication, track trends in their asthma inhaler usage, check the weather and pollen forecasts and share information with their doctor.

Why Louisville? Louisville is consistently in the top 25 challenging cities to live in with Asthma. Asthma is a leading cause of missed school and work days, and uncontrolled asthma can lead to more emergency department visits. As a launch partner in this innovative program, we were excited to be apart of the study to help make a difference in the Louisville community.

The Air Louisville study had over 1100 participants, 89% of which had uncontrolled asthma before joining the study. Participants were at least five years of age, diagnosed with asthma, and lived or worked in Jefferson County. They collected 1.1 million data points, including 251,000 medication ‘puffs’ from inhalers.

Using the location data and the recorded times from the inhalers, they coordinated the ‘puffs’ with air and environment data. The environmental condition data included pollen levels, temperature, humidity, ozone and wind speed. Using the environmental data they were able to determine specific triggers that are common in Louisville. The data also allowed them to map asthma risks across Jefferson County, identifying neighborhoods in which city intervention could help those living with asthma.

Over a 12 month period during the study, participants saw an 82% reduction in asthma rescue inhaler use, a significant increase in the number of symptom-free days, and 14% increase in nights without symptoms. 29% of the uncontrolled participants gained control of their asthma during this time.

According to the Air Louisville study, the most common asthma triggers are:

Below you can view a map showing which neighborhoods have greater asthma risk: 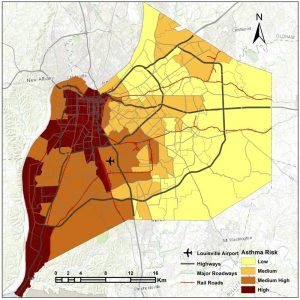 View the Air Louisville report card to see the full report. Using the data from Air Louisville, the city can take action with data backed steps to help reduce asthma and COPD triggers.

The Next Steps for Louisville:

The Institute for Healthy Air Water and Soil collaborated with the Louisville Metro government to create a plan for Louisville. This plan includes:

The Air Louisville study is the first of its kind, so many cities around the country can learn from the results. This data can help many understand the greater impact of air pollution on respiratory disease.

If you live in the Louisville area with uncontrolled asthma, talk to an allergy and asthma specialist. They can help develop a plan to get your asthma back under control.

Want to join the discussion?
Feel free to contribute!

Back to School with Food Allergies
Scroll to top